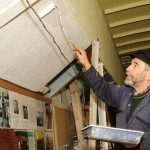 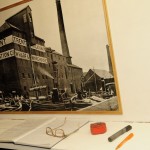 exhibits, as well as preparing the barge for some important meetings and visits in the near future – I can’t help thinking a helping hand would be more than welcome! 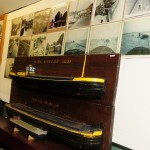 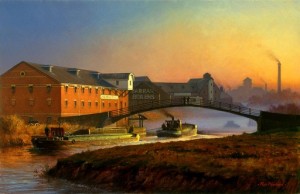 This superb giclee print is now available as a print or framed, and all proceeds from sales go to the restoration of ‘Leicester Trader’ –  for more details please see our sales page, or click on the image.

Long standing friend Bill Middleton and one of the last remaining regular barge skippers to run to Newark is 91 today. As he is staying with a relative in Knottingley I had a run up there to have a yarn and a pint with him. I collected member and also a former tanker skipper Frank Major and we called at the Waterways Museum at Goole, then went to the former Harkers shipyard and then on to see Bill. 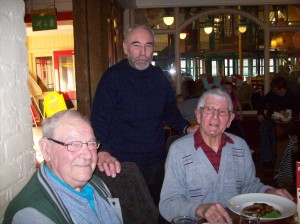 Left to right, Frank Major, Les and Bill–birthday treat sausage and mash and a lager.